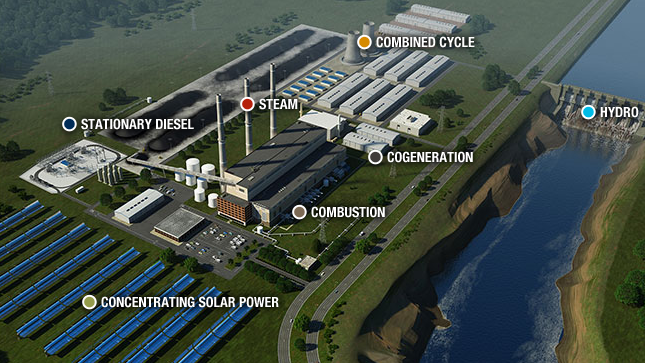 In solar parabolic trough power fields‚ a heat transfer fluid (HTF) is circulated through the receiver tube and returned to heat exchangers in the power block where the fluid is used to generate high-pressure steam. CIRCOR hot oil pumps are used to move the heat transfer fluid through the collector tube meeting temperature application requirements up to 750°F/400°C.

Allweiler Hot Oil pumps are the choice for this application.

Contact us using the form on the right to learn more about our pump and engineered system capabilities.

Solar power parabolic trough systems use parabolic curved‚ through shaped reflectors or mirrors to focus the sun’s energy onto a receiver pipe. The receiver pipe runs at the focal point of the reflector. The parabolic shape of the mirror enable them to focus the sun to 30x – 60x its normal intensity onto the receiver pipe. The concentrated energy heats a heat transfer fluid (HTF)‚ usually oil‚ flowing through the pipe. This fluid is then used to generate steam which powers a turbine that drives an electric generator‚ which is comparable to the steam power plant process.

The parabolic trough collectors are situated on an east-west axis and rotated with the sun to maximize the sun’s energy input to the receiver tube.

Solar power parabolic trough systems have also been used as a supplement to traditional steam fired power plants. In this example‚ the heat transfer fluid is circulated to the boiler for steam generation replacing a fossil fuel.